Starting on Saturday, December 17, 2022, through an original museological facility, Pierre Georges Latécoère, aeronautics pioneer, is “back” thanks to this new exhibition at the Montaudran site in Toulouse, which he established over 100 years ago. 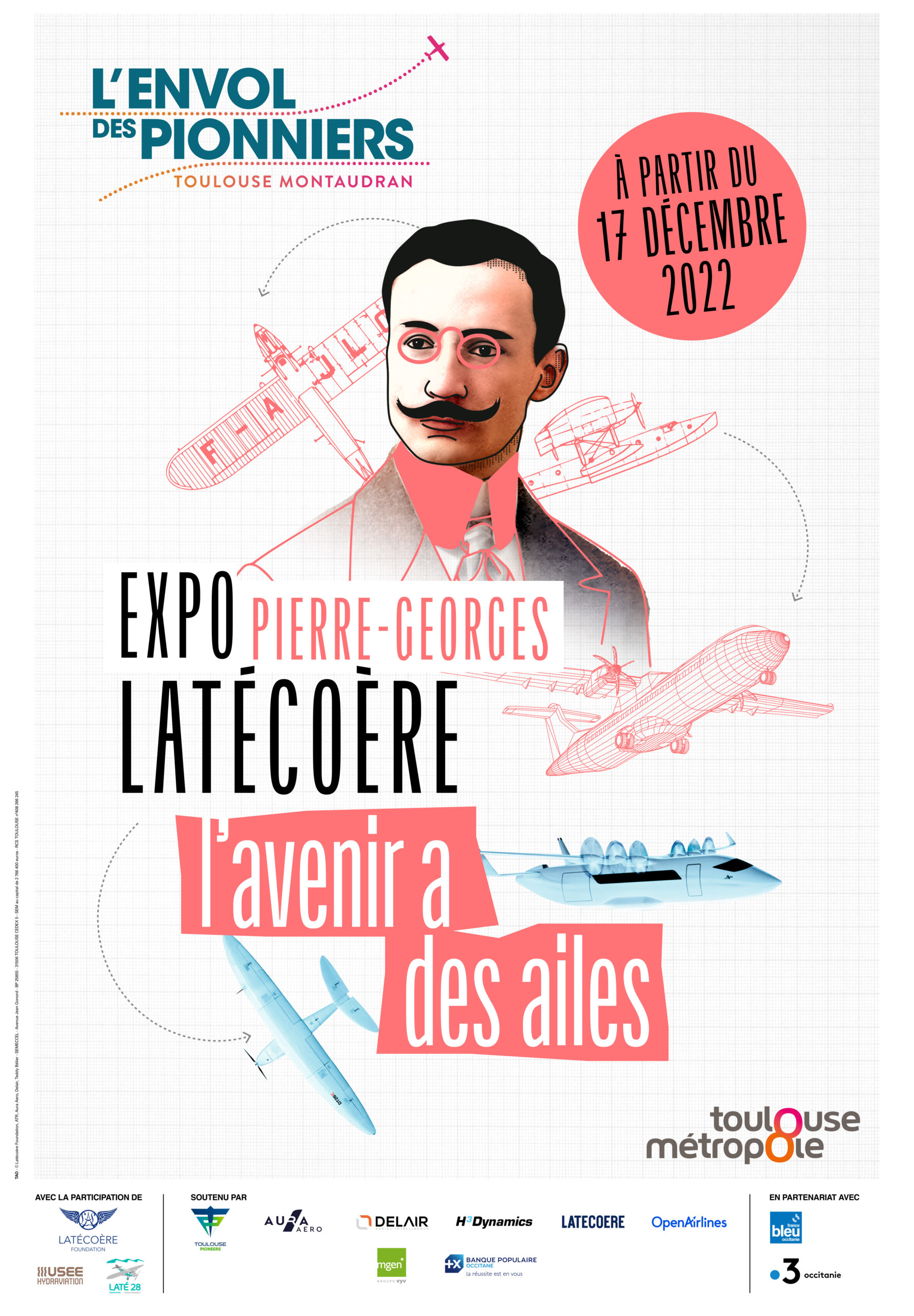 PRESS PREVIEW TOUR OF THE EXHIBITION
Thursday 15 December at 1.30 p.m.

For the opening of the exhibition “Pierre Georges Latécoère, The Future Has Wings,”L’Envol des Pionniers invites the public to an Open Doors Weekend, Saturday 17 and Sunday 18 December 2022, with many activities for all the family.

Starting on Saturday, December 17, 2022, L’Envol des Pionniers will be presenting an original exhibition on the entrepreneur and founding father of postal aviation, the Aéropostale: Pierre Georges Latécoère.

In an immersive scenography that immerses visitors in the atmosphere of the aircraft assembly workshops of the 1920s, the exhibition retraces the journey of this visionary who built the foundations of Toulouse, one of the world’s aerospace capitals on the historic site of L’Envol des Pionniers.

The exhibition “Pierre Georges Latécoère, The Future Has Wings” thus retraces the path of this pioneer who, when no-one wanted to believe him, managed to achieve the impossible: to create air routes connecting people across several continents beyond deserts, oceans and mountains.

From Toulouse to Barcelona on 25 December 1918, then from Toulouse to Rabat in Morocco the following year, continuing through Dakar in Senegal (1925) and from Buenos Aires to Brazil (1929), Pierre-Georges Latécoère managed to found a truly international-scale aeronautical organisation in a few years.

Through many historical objects and original mediation features, the visitor will meet this man who transformed the airline industry and the future of Toulouse. Through loans from the Latécoère Foundation and the Musée de l’Hydraviation de Biscarrosse, the exhibition invites visitors to discover the most emblematic aircraft such as the Laté 28, the Laté 300 or the Laté 521 seaplane.

It all began in 1917, right in the midst of the First World War. Pierre Georges Latécoère, then head of a company manufacturing wooden wagons, responded to a request by the French government and set up in Toulouse, in the district of Montaudran (on the current site of L’Envol des Pionniers), the region’s first aerospace construction company. In just six months, he, who had never built any aircraft, managed to deliver up to six aircraft a day to the French army.

Anticipating the end of the war, Pierre Georges Latécoère refocused his company and decided to convert his military aircraft into civilian ones and to use unemployed pilots from the First World War.

Henceforth, the distribution of mail would not only be done by trains or boats but also by air… On December 25, 1918, accompanied by pilot René Cornemont, the entrepreneur flew from the Toulouse-Montaudran airfield to Barcelona. This was the very first reconnaissance flight of the Lignes Aériennes Latécoère.

The exhibition offers a space dedicated to today’s Toulouse entrepreneurs, committed to continuing the legacy left by Pierre-Georges Latécoère. Pioneers in their industry, they dared to go beyond technological limits to develop clean, reliable and efficient aircraft and solutions for tomorrow’s aviation.

The public will find out about six partner companies (Aura Aero, Delair, Latécoère, Openairlines, H3Dynamics), engaged in the decarbonisation of the air sector through iconic projects such as the Delair company’s hydrogen drone or the start-up Aura Aero’s model of their electric aircraft.

IMAGINING THE PLANE OF THE FUTURE WITH TODAY’S AVIATION PIONEERS

Throughout the exhibition, visitors are invited to participate in a challenge on tomorrow’s aviation. The exhibition invites the public to familiarise themselves with the new environmental issues for aviation through an interactive tour and the presentation of current experiences of pioneering Toulouse entrepreneurs working to decarbonise aviation.

Thus, while drawing inspiration from the pioneering values of Pierre Georges Latécoère, visitors, children and adults alike, will have to imagine a sustainable aircraft or drone. To do this, they will have to form a team, define the energy they want to use (hydrogen, electricity, etc.), explore their impact on the design of the aircraft and define routes to consume less or reduce their carbon footprint…

The visit of the exhibition will end “with” Pierre Georges Latécoère who, thanks to an original facility, will address the visitors directly to decode with them the choices they made during their challenge. The right time to remember the values of a pioneer: boldness, courage, perseverance, rigour…

SPECIAL PROGRAMME FOR THE OPENING OF THE EXHIBITION

The Envol des Pionniers invites the public to a special “open doors” weekend on the weekend of December 17 and 18, 2022 with access to all its permanent and temporary exhibitions and many events for all the family, free of charge

Admission with the purchase of a ticket to L’Envol des Pionniers including permanent and temporary exhibitions.

This exhibition was produced with the participation of:

This exhibition is supported by: