On the occasion of the celebration of the 75th anniversary of the publication in France of Saint Exupéry’s most famous work, discover the exciting life of this legendary man and the wonderful world of The Little Prince!

Two places the exhibition can be explored:

Under the distinguished patronage of Mr. Emmanuel Macron, President of the Republic. 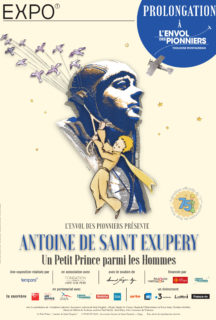 The exhibition “Antoine de Saint Exupéry, A Little Prince Among Men,” on the historic fields of the Aéropostale in Toulouse.

Dive into the private life of the aviator, the writer, the poet, the humanitarian.

On entering the aircraft hangar, visitors set off to meet Antoine de Saint Exupéry, “The Aviator,” where the key moments of his life and the legendary aircraft associated with each of these periods are presented. Visitors will find a real-sized replica of the first aircraft of La Ligne, the SALMSON 2A2 on which Antoine de Saint Exupéry flew. In this way, young and old will find another facet of the famous writer: that of the pioneering pilot of the Aéropostale as well as test pilot and raid pilot.

A Life Devoted to his Love for Aircraft

The exhibition retraces the life of the legendary pilot from his winged bike as a little boy to his tragic death aboard the legendary Lockheed F-5 Lightning above the Mediterranean. With its original scenography, combining personal objects, sound and visual installations, books written about the time by the writer-aviator: the exhibition invites the public to explore the career of this courageous and deeply humanitarian man.

In the Aviator-Writer’s Private Life

The public will also explore the pilot’s deep friendships with his colleagues on La Ligne Aéropostale as well as mechanics, radio operators and navigators. Through historic images, visitors will also plunge into the heart of Antoine de Saint Exupéry’s private life: his family and his special relationship with his mother, his love for women, but above all his meeting with Consuelo who would become his wife in 1931. He was also a lover of literature and cinema. The exhibition looks back on the films which established his reputation across the Atlantic, such as the adaptation of Southern Mail in 1937. The last part of the exhibition retraces his exile in New York where he wrote many of his books, including The Little Prince. Then visitors can explore the writer’s commitment to fight with the Americans during the Second World War by joining a reconnaissance squadron, which inspired Flight to Arras..

The Marvellous World of The Little Prince

Like a relay handover between Antoine de Saint Exupéry, the Aviator, and Antoine de Saint Exupéry, the Artist, the exhibition closes with a series of colourful sculptures produced by Arnaud Nazare-Aga. Each object represents a drawing from . Colourful and sparkling, the dozen sculptures invite visitors to dream and see the world through children’s eyes.

An Educational and Cultural Programme


L’Envol des Pionniers offers educational support for the exhibition throughout the school year, with workshops, encounters and projects which help students to explore Antoine de Saint Exupéry’s character more fully. At the same time, a special cultural programme will help to raise awareness of the aviator-writer and his work through multiple viewpoints where literature, cinema, science and the technical world combine more widely with the imagination.


Every book has a story and that of The Little Prince with the birth of Antoine de Saint Exupéry. The French writer, poet, airman and reporter was born on 29 June 1900 in Lyon and disappeared on a flight on 31 July 1944 off Marseilles, dying for France.

The writer-aviator is known globally for The Little Prince, a philosophical story, marked both with lightness and pessimism towards human nature. Published in 1943 in New York, then in France by Gallimard in 1946, posthumously, this book quickly became a huge world success.

But Antoine de Saint Exupéry is even more than that. Antoine de Saint Exupéry was a simple, direct man who didn’t beat about the bush, like his style and the men he admired, such as Guillaumet, Mermoz, the pioneers of the Aéropostale and, in 1940, his comrades in Group 2/33. Through his life and works, he has passed on universal values which today find a quite special resonance, in a world context of crises and tensions…

A pioneering and visionary spirit

A pioneering and visionary spirit, particularly on themes of exploration and protection of the environment. “We stand together, borne by the same planet, the crew of the same ship,” from Wind, Sand and Stars.

Humanitarianism: all his life, Saint Exupéry never stopped condemning and combating the defects which give rise to so many of these problems: indifference, self-absorption, intolerance etc.. He rejects them with a profound sense of a humanitarian ideal. “I think that mankind’s supremacy is the basis of the only significant equality and freedom. I believe in the equality of human rights for each individual,” from Flight to Arras.

Commitment: for Saint Exupéry, there is, of course, intellectual and military commitment, but there is, above all, moral commitment. “If respect for mankind has a foundation in men’s hearts, men will clearly end up founding in return the social, political and economic system which consecrates that respect. A civilisation is based first of all in substance. ” from Letter to a Hostage.

Pilot, inventor, journalist, writer, player, illustrator, filmmaker, Antoine de Saint Exupéry had a thousand lives in one. His courage, his determination, his ambition, his freedom and his humanitarianism were all values which enabled him to surpass his limits and enter, despite himself, into legend.

With the support of Arnaud Nazare-Aga, the contribution of the Fondation Latécoère, the Antoine de Saint Exupéry – d’Agay estate, the Musée Air France, the Musée de l’Hydraviation in Biscarosse, of Christian Seveillac, of the Musée de l’affiche in Toulouse, the Paul Vachet – Jack Mary Archives and Les Ailes Anciennes de Toulouse.